“We support Ayuda because they provide important humanitarian assistance to our most-marginalized neighbors.” 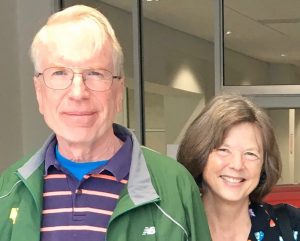 “At Ayuda events, I’m sometimes asked how I first became associated with the organization. I started to pay more attention to immigration after traveling abroad to Mexico and South America.I stayed with host families, which gave me the additional in-depth experience of learning the language and culture.

When I returned, I wanted to stay connected and become more involved with the immigrant community in my hometown of Washington, DC. I did what anyone else would do and Googled immigration nonprofits in the DMV and found Ayuda.

After reviewing their website and reading about the impact they have on our immigrant community, I made a small donation. A small donation resulted in an invitation to Ayuda’s annual welcome breakfast.

At their annual welcome breakfast, my wife Diann and I learned a lot about the immigrant community. We had the opportunity to hear riveting and emotional stories from some of Ayuda’s clients, who have faced domestic violence, sexual assault, and trafficking and other atrocities. I also learned about notario fraud, which before Ayuda, I had never heard about. I instantly became very interested in notario fraud, and wanted to learn more, so I spoke with the managing attorney of Ayuda’s Project END team.

Immigrants, especially undocumented immigrants, are vulnerable to fraudulent schemes. Notario fraud is a scam practiced in cities around the country that takes advantage of the confusion between the terms notary and in Spanish, notario. In the United States a notary is someone who can authenticate signatures on important documents. In many Latin American countries, however, notario refers to a professional legal expert such as an attorney. Ads and office signs using the word notario imply legal help with citizenship status. This can cost immigrant families hundreds or thousands of dollars and not only fails to lead to legal residency but can also result in unwanted attention from authorities possibly leading to deportation.

In 2014, I was given the opportunity to help write an article about an example of notario fraud that Ayuda attorneys referred for prosecution in Montgomery County Maryland. The article profiled an undocumented construction worker who was a victim of notario fraud but was willing to publicly describe what had happened. This case resulted in the defendant being sentenced to 6 months in jail.

Diann and I hope that we have contributed in a small way to Ayuda’s mission. Their talented and dedicated staff, and the pro bono attorneys who donate their time to Ayuda’s clients, provide important humanitarian assistance to our  most-marginalized neighbors. Structural immigration reform may still be some distance away, but it has been gratifying to have contributed to our immigrant neighbors in the Greater Washington metropolitan area.”

Ayuda wishes to thank Alan and Diann Cashell for sharing their story with Ayuda and our supporters. It is because of donors like the Cashell’s that Ayuda has been able to expand its important services to serve more low-income immigrants than ever before in D.C., Virginia and Maryland. Thank you.