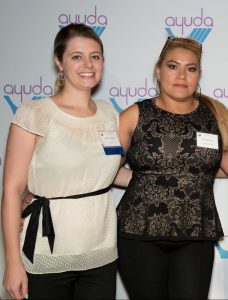 “Helen Pacheco, a former client of mine, recently wrote to you about her journey with Ayuda. I am honored that she refers to me as her “angel” and that we still share a special connection after all of these years. In truth, you surely would also have rushed to her side to offer help had you heard her story of courage, strength, and compassion firsthand.

It was my privilege, and Ayuda’s, to have been in the right place at the right time for Helen and her family, in order to provide them with the knowledge and support they needed to access the legal remedies that were available to them through our justice system.

I met Helen at her lowest point. She had just buried her husband. She and her two teenagers wore electronic ankle monitors, allowing ICE to monitor their movements at all times, including when the children were attending church or school. Her youngest child Christopher, a U.S. citizen toddler, was severely ill, due to complications resulting from his premature birth. Worst of all, in her hands was a final warning letter from ICE demanding that she and her children prepare for their imminent deportation to Honduras.

Helen’s already grim life could have gotten ten-times more unbearable if it weren’t for Ayuda.

Christopher was born twenty-one weeks premature after Helen suffered a violent assault during her pregnancy. He survived against all odds. Although at the time I first met Helen, he was still receiving frequent life-sustaining medical treatments from six different specialists. Despite being so young, a U.S. citizen, and a medical “miracle” according to his doctors, Christopher was about to be sent to Honduras along with Helen and his siblings, as he had no other parent or caregiver in the United States. Relocation to Honduras would have been a death sentence for Christopher given his medical needs, and the whole family feared violence from the notorious street gangs that had gained significant power there.

We had to work quickly as the family was on the verge of being deported. When I heard Helen’s story and learned that she was a domestic violence survivor, I assisted her in filing a U visa application, a legal remedy for victims of crime who cooperate with law enforcement. We filed an emergency stay of removal to stop the deportations, buying us some time while the visa application was pending. Eventually Helen’s U visa was approved, meaning that the whole family could stay, and providing Helen and her older children with a path to legal permanent residency.

Sometimes, I think about what could have happened if Helen had not walked into my office that day seven years ago, and if Ayuda had not had the availability and resources to take her case. I cannot help but think of the countless other families, just like Helen’s, who call our office, but who we do not currently have the capacity to serve due to resource constraints.

Helen has glowing praise for Ayuda. What’s more remarkable is Helen herself. She is a true force of nature. She is strong, determined, and one of the most spirited individuals I have ever met. Today, Helen is thriving as a fitness coach. She is encouraging others to practice healthy living, follow a healthy diet, and to exercise. She motivates many to live their best lives and it has been amazing to watch her helping and inspiring others. I have worked with Helen and her kids for a long time and it has been an inspiration and a privilege to be a part of their journey.

At Ayuda, we are currently able to waive our nominal consultation fee for survivors of domestic violence like Helen. Our donor contributions are what allows Ayuda to offer this lifeline to immigrants living under the gravest of circumstances and to represent other vulnerable families in their time of need. Their resilience, our specialized knowledge and experience, plus your support, is how we move mountains. This is how the justice of the American dream is realized; how cycles of violence and exploitation are broken, and how individual lives are rebuilt and transformed.”

Ayuda's Response to Busing of Migrants

Since April 2022, Ayuda has been working to help coordinate the humanitarian response as the governors of Texas and Arizona continue to send thousands of migrants on buses to Washington, D.C.

Our legal team is providing individualized legal orientations for migrants explaining the immigration system and helping them be aware of their rights and responsibilities.

“Immigrants are first and foremost, human beings. They deserve respect and compassion, and Ayuda will continue to do what we do best – provide holistic support to those in need in our communities.” - Paula Fitzgerald, Executive Director