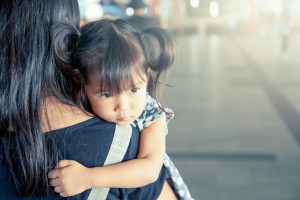 Mary*, a survivor of childhood assault, fled violence that had engulfed her home in Central America and immigrated to the United States in 2016. Anxious to begin a new and better life, Mary settled in quickly and fell in love.

Mary and her boyfriend welcomed a beautiful baby in 2017 and soon after, moved to D.C. to live with Mary’s cousin. Mary thought she had left violence behind her, but sadly, she was terribly mistaken.

During her first few months in D.C., Mary frequently experienced physical and sexual assault at the hands of her boyfriend. The abuse escalated, putting her child in harm’s way. Mary’s cousin had seen enough and threw Mary, her child and her boyfriend out.

With nowhere to go, Mary and her small child went to a temporary shelter. An onsite case manager referred Mary to Ayuda in the fall of 2017.

Abused, desperate and alone, Mary immediately found the support she needed at Ayuda’s walk-in clinic for those that have been victims of domestic violence and sexual assault.

Ayuda’s social services team stepped in to help Mary obtain food, therapy and access to transitional housing so that she could begin to recover from her abuse in a safe stable environment. With her new-found stability, Mary was able to enroll in school.

Because of donors like you, a year and a half later, Mary has completed her GED certification, has full custody of her almost three-year-old child, and looks forward to receiving her Early Childhood Education Certificate this fall.

However, our work is not done.

Ayuda’s immigration legal team is helping Mary to apply for a U-visa and our social services team continues to provide Mary with therapy to help her deal with the trauma she has experienced.

“Ayuda helped me and my child start a new life. Their [holistic] services really saved my life.” says Mary.

Because of Ayuda donors and supporters, clients like Mary and her child found the holistic services they so desperately needed at Ayuda.

There are many immigrants in the Greater Washington area like Mary, who feel threatened and are living in fear. Your gift can make a difference. Your gift can change their lives.

Ayuda is excited to announce that as of Tuesday, September 1, 2021 we have a NEW DC office! Ayuda will no longer be operating out of our 6925B Willow St NW nor our 1413 K St. NW offices.