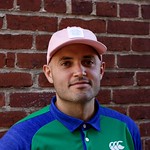 FOUNDER AND CO-OWNER OF TIMBER PIZZA CO. AND CALL YOUR MOTHER

Andrew Dana is D.C.’s king of carbs. As the founder and co-owner of two award-winning restaurants, Timber Pizza Co. and Call Your Mother (a Jew-ish deli), Andrew has proven the secret is in more than just the sauce. In 2010 he left D.C. to attend business school at Fordham University, where studying and researching NY-style slices culminated into his capstone project: creating a pizza shop.

Two years later, after an informal meeting with a fellow D.C. native and now business partner, Call Your Mother Jew-ish deli was born. Inspired in part by Andrew’s Jew-ish background and a dream to open a deli, the wood-fired shop infuses Jewish influence while flipping traditional deli staples on their head. The Park View deli has received national recognition from Conde Nast Traveler, The Washington Post, Washingtonian, and Washington City Paper, most recently being named one of Eater’s Best New Restaurants in America, and a 2019 best new restaurant in Bon Appetit’s America’s 50 Best New Restaurants.

Andrew is inspired by the unique neighborhoods that make up D.C. and his restaurants are a reflection of the communities he’s grown to love. Andrew continues to be motivated by the desire to create authentic, yet unexpected concepts, menus, and spaces that, of course, pay homage to his love of carbs.