From Slave Laborer to Devoted Wife and Mother

“When Isabel first came in for a consultation, she was extremely concerned about talking to someone about her status,” said Rebecca, staff attorney at Ayuda. “We explained that everything would be confidential. From there, the hardest part for Isabel was talking about what happened during those years when she was a victim of human trafficking.”

When Isabel was eleven, she’d been living without her parents for a year. They both died.

Her brother was 25 years old, married, and living in the U.S. He found Isabel and promised her a beautiful life with him and his wife. He told her she could go to school. He told her life would be better. Her imagination would not let go of images of the better times to come.

Her brother arranged for her travel to the U.S. She was smuggled in by men who charge for such a service. When she arrived, however, she was not welcomed to her new home with an embrace from a loving brother. Instead, she was put to work in the house.

For three years she cooked and cleaned and cared for her toddler cousin. She was never given a chance to see the inside of a classroom. At fourteen, she was put to work in a clothing factory and saw her wages go into her brother’s pockets.

Years of servitude passed and no one noticed—so she thought. Someone did notice though. Ernesto would stop by the house at times to visit with Isabel’s brother. Ernesto noticed that she did not smile—that she did not laugh.

Eventually, she noticed him too. She learned to trust him and shared her story. There can be love in sadness, and they had found it in each other. They fled to Virginia together. They were followed by threats from her brother and other men who do such things. They were serious threats.

Isabel and Ernesto, scared and in love, became parents to a beautiful baby girl. Unlike Isabel and Ernesto, who arrived in the U.S. as children without proper documentation, their daughter was born a U.S. citizen. But with a language barrier, little education, and immigration issues, the couple was unsure of their next move. It was during these trying times that Audrey heard Isabel’s story and contacted us to help.

Our attorneys helped Isabel successfully apply for a T visa. Isabel’s trafficking was reported to a detective who assisted in exposing conditions at the factory where Isabel had worked, preventing future incidents of coerced or forced labor.

Our social workers helped the couple pay their rent and buy clothes for their, now, two kids. Ernesto had a deportation order from when he was a child. That order was reopened and terminated. They no longer had to live with the constant fear that they would be swiftly separated someday. 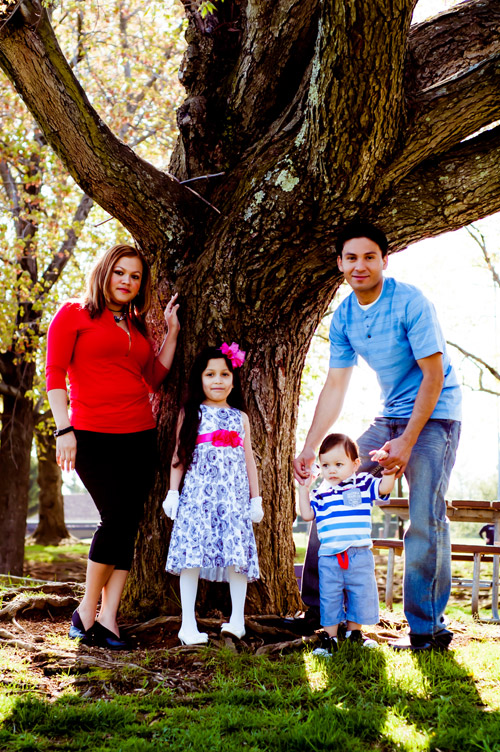 “I don’t have to worry anymore. Now, all I have to do is work hard and think about my family.”

Ernesto was working so hard that he needed two jobs to contain his enthusiasm. At night, he cared for the two young children. Isabel couldn’t do it. Nighttime was time for her studies.

“I want to be a police officer, because they help people.”

Eventually, as they kept gaining more control of their lives, the couple was able to marry. Isabel wore a long, flowing dress and they celebrated with champagne, a few friends, and the kids.

Soon Isabell and her family will be able to travel back to El Salvador to visit Ernesto’s mother, who has yet to meet her two grandchildren. Maybe then Isabel will again know the feeling of family where it was once taken from her.

Thank you, Isabel, for allowing us to share your story. And a special thank you to Quinnie Lin, Ayuda volunteer, for putting Isabel’s story into words. Isabel’s story is a true Ayuda success story; however, names and identifying details have been changed to protect the privacy of individuals.

Ayuda's Response to Busing of Migrants

Since April 2022, Ayuda has been working to help coordinate the humanitarian response as the governors of Texas and Arizona continue to send thousands of migrants on buses to Washington, D.C.

Our legal team is providing individualized legal orientations for migrants explaining the immigration system and helping them be aware of their rights and responsibilities.

“Immigrants are first and foremost, human beings. They deserve respect and compassion, and Ayuda will continue to do what we do best – provide holistic support to those in need in our communities.” - Paula Fitzgerald, Executive Director